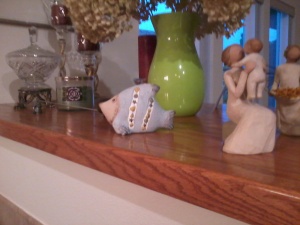 Yesterday when I picked my almost-94 year old mother up for a 4th of July lunch at our house, she handed me a small blue pottery fish she’d won at Bingo, and I think it changed both of our lives.

She was happier than I’ve seen her in ages. She has been living in an assisted living facility for the past year, with all meals prepared, med techs to dispense medication per doctor’s orders, and staff on call to change oxygen tanks & help with showers. Housekeeping services are provided, all meals are served in the dining room, and a beauty shop and mail boxes are only steps from her apartment.

But my mother sat in her room for one solid year, watching the weather channel on T.V, with the sound off. There was no convincing her to do otherwise. For the last month I’ve asked her to attend the afternoon Bingo games offered several times a week, and circled the schedule on her activities calendar. “Here, see? They have Bingo at 2 p.m. Wednesday, and again at 3 p.m. on Friday. It’s just down the hall in the dining room.” There was never a response from her.

But yesterday when I picked her up she was all smiles. She handed me a small blue pottery fish that she’d won at Bingo. I almost cried from joy. The Bingo Fish now lives on my fireplace mantle next to several wooden angels friends have given me. I doubt it’ll ever be moved. I could just as well call it the Angel Fish for all the joy I feel each time I see it.

For me this little fish, decorated with colorful seashells, reminds me of Pensacola, Florida, where I was born and where my family lived for years. It also represents the long struggle my mother has given up. Her acceptance of her physical condition has come full circle. She’s on oxygen 24-7, doesn’t take a step without her walker, has lost 8” in height from osteoporosis, has congestive heart failure, worsening dementia, is totally deaf in the left ear and hears only at the nerve level in the right ear with the help of a hearing aid.

A year ago the manager at her independent-living facility called me on the phone to tell me I had to move my mother to assisted living, because she had become too needy for their facility, even though she had a care giver who stopped by on a regular basis to help, and had me to pick up medications, buy her groceries, take her for doctor and dentist appointments, spend the night when needed and so much more. With one phone call all of that changed. Now, one year later, my mother appreciates where she lives. And so do I.

Her Bingo Fish symbolizes a new sense of freedom for our entire family, including my mother, knowing we’ve done the most caring thing for her in her condition. And best of all, now she knows just how much fun it is to win at Bingo! She’s elated that she WON the first game of Bingo she played there, and got to pick out a prize. What’s not to love about that? Her Bingo Fish might be an angel fish, after all.

Her 94th birthday is August 12. Maybe we’ll have a Bingo birthday party. For certain ballooons will be involved!

A Southern writer now living in Georgia after many years in the Pacific Northwest.
View all posts by beeconcise →
This entry was posted in Uncategorized. Bookmark the permalink.