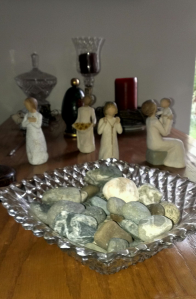 This morning I took a picture of a bowl of rocks on our breakfast table. My rocks sit in a vintage glass bowl that belonged to my mother, who has just moved to an assisted living facility and no longer has room for her pretty glasses and dishes, or any need of them, as a matter of fact. My daughter, Allison, has a matching bowl (from her grandmother) on her table, also, with flowers in hers.

The rocks in my bowl are there because it makes me remember Allison, almost-five Asher, and husband, Chris, who were here this summer and soothed my ruffled feathers during my mother’s move to the new retirement community.

I look at this beautiful and fragile glass bowl, filled with sturdy, heavy rocks, and see both the past and the future, in one lovely bowl on my table. In the background of the photo I took, we can see our healthy Ash tree in the yard. The funny thing about this is that Ash thinks this tree was named for him, and in a way I guess it was, as it was planted in the same year he was born, but just three months later. Asher Ellis Workman and our Ash tree both arrived in our lives in 2006.

It’s also nostalgic to me to note that my grandson’s middle name is Ellis, my mother’s maiden name. And so it goes … one thing follows another, people follow people, lives follow lives, then age, die, and we begin again. I like to think that one day a great grandchild of mine will have this same vintage glass bowl on his or her table … maybe filled with sea shells from Pensacola, Florida, where this story began, at least for me.

A Southern writer now living in Georgia after many years in the Pacific Northwest.
View all posts by beeconcise →
This entry was posted in Uncategorized. Bookmark the permalink.